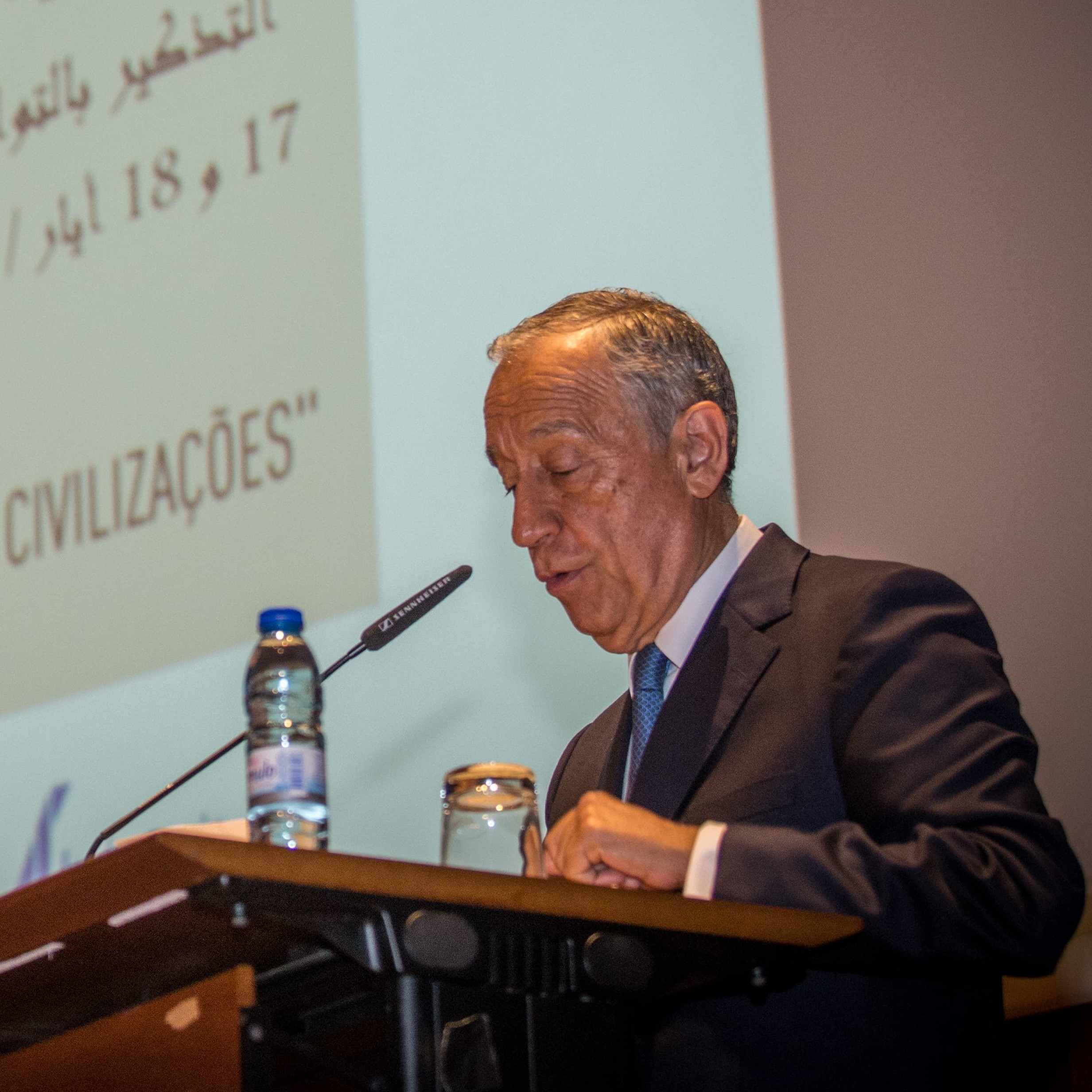 The President of the Republic presided today at the Opening Session of the 3rd Edition of the Arab Days: “Arab-Islamic Memories, Dialogue between Civilizations”. In his intervention at the event, he highlighted the role Portugal should play in creating opportunities for dialogue and understanding between peoples and pointed out the country's secure and predictable character as a partner par excellence of the Arab world.

Lisbon, 17 May 2017 - The President of the Republic presided, this morning, at the Opening Session of the 3rd Edition of the Arab Days: “Arab-Islamic Memories, Dialogue between Civilizations”, an initiative organized by the Arab-Portuguese Chamber of Commerce and Industry (CCIAP) that takes place during the today in the Auditorium of the National Archives of Torre do Tombo, in Lisbon.

Marcelo Rebelo de Sousa started by recognizing the role Portugal should play in the relationship with the Arab world, pointing out that the country, endowed with “A constant universalist vocation, it is in a privileged position to promote, in the concert of nations, the dialogue between civilizations, cultures, peoples and religions”.

A dialogue “Urgent”, face to “A world and a time in which the narratives (…) of intolerance, exclusion, fanaticism, and ignorance take on expression, which know no boundaries or limits. It is a fight in favor of openness and not of closure, of knowledge and not of ignorance, a fight in favor of bridges and not walls. In a word, a struggle for peace, based on a humanist vision that is ours ”.

From Portugal, the President of the Republic leaves the certainty that the country will be "Always ready to strengthen relations, promote mutual knowledge among our peoples for mutual benefit, going further in the consolidation of ties, in the certainty that what united us in the Past can and must be multiplied for the Future".

Marcelo Rebelo de Sousa believes that “Portugal wins, but the Arab world wins, because it knows that in Portugal it has a partner known for political peace, institutional stability, social peace, security, predictability, the beginning of an economic recovery, the consolidation of public finances and for the concern of ecumenical openness to all ”.

This message is echoed in the words of Ângelo Correia, Chairman of the Board of Directors of CCIAP, who, at the opening of the event, points to the entity “A promoting mission in the economic, financial and commercial areas”, but considering that “In addition to trade there is a fundamental reality of getting to know each other”.

Ângelo Correia highlights the relevance of the initiative in recognizing the Arab legacy as one of several “decisive influences” that we knew how to use to “Not only to change and change, but perhaps to perceive others better (…) making Portugal creditor of that memory that we respect, accept and that we know that enriches us”. The knowledge sharing promoted at these Days is proof that “We are proud of our identity and today we celebrate it”.

The President of the Board of Directors of CCIAP sees the President of the Republic's support for the event as “Favorable expression” in favor of the cause “Of peace, of our identity, of strengthening the relationship and knowledge between peoples”.

In the morning there was also the first panel inserted in the Colloquium to be held throughout today, dedicated to the theme of “Arab-Islamic Cultural Legacy in the Iberian Peninsula”. The session featured interventions by Salah Fadl, Professor of Comparative Literature at the Faculty of Letters, University of Ain Shams, (Egypt); Abdool Magid Abdool Karim Vakil, President of the Islamic Community of Lisbon; Abdulaziz AlMussallam Al Khaaldi, President of the Sharjah Institute for Heritage (United Arab Emirates) and Adel Sidarus, retired professor of Arab-Islamic Studies at the University of Évora.

The specificity of the Al-Andaluz experience, as an example of a period of extraordinary scientific and cultural creation and of the coexistence and symbiosis of peoples of three religions in the same space, was the focus around the debate on the Arab-Islamic presence in the peninsular territory. .

The Colloquium continues in the afternoon, with two sessions dedicated to the “Importance of the Arab-Islamic Presence in the Iberian Peninsula” and “Expressions and Achievements of the Arab-Islamic Legacy in the Iberian Peninsula”. Today's activities end with a Closing Session, which will be attended by the Minister of Culture, Luís Filipe de Castro Mendes, and the UN High Representative for the Alliance of Civilizations (2007-2013) and Former President of the Republic, Jorge Sampaio.

In addition to the Colloquium taking place in Lisbon today, this 3rd Edition of the Arab Journeys continues tomorrow, with guided visits to Lisbon and Sintra in which it is intended to highlight some of the legacies and urban traces and other testimonies of the Arab-Islamic presence in Portugal.

Founded in 1977, the Arab-Portuguese Chamber of Commerce and Industry is a non-profit association / public utility. Its main objective is the development of economic, commercial, industrial and cultural relations between Portugal and the 22 countries of the League of Arab States, on a basis of mutual interest, contributing considerably to the strengthening of cooperation relations between Portugal and the Arab World. More information at www.cciap.pt